I’m a Crazy, Violent, Alcoholic Racist on a Wrecking Ball

Imagine one of your shining moments: A time when you succeeded, the crowd cheered, your dreams came true, you got an incredible promotion, or you received the best compliment of your life. Maybe you imagine when you were saved or baptized or when you shared your testimony with someone and they made a decision to follow Jesus.

Now imagine one of your worst moments.
Ugh.

Maybe you were in a fight with your significant other.
You said something you never thought would come out of your mouth.
Threw something at the person. Punched a wall or even the person. Had an outright meltdown. Attempted or considered suicide.
(Yes I admit, some of all of these may or may not be personal examples.)

If you were dating the person, I think it’s safe to say you’d probably break up with them. It would be infinitely frustrating and suffocating to be seen for your awful mistakes instead of for who you believe yourself to be.
But what if you couldn’t leave that person or people?
What if you were constantly surrounded by people who always reminded you of your failures because of who they understand you to be?

Pause. Breathe. It’s okay… you can put your ugly moment away now.

I’ve been wanting to write about this for a couple months now.

It all started when I saw this Retweet on my Twitter feed by Sadie Robertson.
(For those of you who aren’t tweeters, a retweet means you share what someone else has posted, so that everyone who follows you can see that person’s post, too.)
Sadie shared what one of her fans said about ditching her former role model, Miley Cyrus, and adopting Sadie as her new role model.

My initial thought was, “Wow… what incredible pressure that must put on Sadie now. Imagine if she ever messed up.”

…and then the floodgate of thoughts for this post opened.

(Side-note. I think writers have a million simultaneous thoughts that constantly circulate until a group of thoughts finally come together at the right time… and that’s when a written work is born. This author agrees: – read article here)

I digress.
Back to raging meltdowns.

Everyone old enough remembers this.

Yes, that’s Britney Spears in her glorious, shining moment.
(…or is that just the glare from her head?)

And who can forget Charlie Sheen’s countless meltdowns? 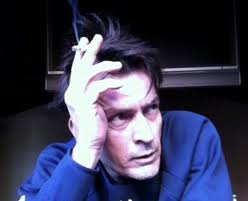 That’s how I imagine how it feels to be under the constant pressure and criticism that celebrities face.

No wonder stories flood the news about overdose, drug and alcohol or sex addiction, suicide, and serial meltdowns amongst the celebrity population. Lifestyle, an altered view of reality, and other pitfalls of fame aside, people in the spotlight are surely to feel depressed and hopeless because of the inability to escape their past due to how their culture continues to define them.

One recent example of someone who majorly screwed up is Donald Sterling, the NBA Clippers’ owner who was caught on voice recording making very racist statements to his girlfriend. (He has since been banned from the NBA and fined the maximum amount allowed.)

I imagine similar to how Miley Cyrus (the poor tweeting girl’s former role model) has been imprinted in our minds as a personified meltdown on a wrecking ball, despite facing consequences for his actions, Donald Sterling will probably forever remain in our minds a raging racist.

Forgiveness?
Or forever defined by his worst mistake?

As “tweeting girl” represents millions of young girls across the country who look up to Sadie Robertson, imagine the pressure Sadie is now under not to ever mess up!
What happens if she does? Forgiveness? Grace? Or is it on to the next person who hasn’t shown their imperfection (yet) as we place them on our idol shelf?

Here’s the issue.
I’m obviously not condoning any of the behaviors or stances taken by these celebrities. I am certainly no racist, I don’t recommend hammering away at someone’s car with an umbrella, nor do I think that swinging naked from a wrecking ball is a great way to achieve positive feedback.

But I do know what it’s like to royally screw up and feel hopeless about myself.
I have been to the bottom so many times and I have given up on myself more times than I can even count. A perfectionist that constantly fails is doomed to depression and hopelessness.

But you know what has pulled me out of that hopeless pit?

Someone looked at me and said, “It’s okay. I forgive you. I know who you are. You are lovely. I don’t define you by your mistakes. I love you.”

As much as I’d love to write books for a living someday, I never want to be a celebrity. There is no grace. You can’t mess up. (And Lord knows I need a LOT of grace!)

I’ve lived back in the States for nearly a year now. It’s been really, really hard.
I have suffered not only because of sins against me but because I have honestly put my heart under the magnifying glass and the operating table for a change.
I have faced skeletons in my closet and demons on my bedpost. I’ve seen the depths of my evil, sinful heart without Jesus and been scared out of my mind at the possibility of life without Him. I’ve been the worst mess I’ve ever been in my life (and I’ve been through hell in my 28 years)! At times I can’t believe the things I’ve said and done and if I ever were to listen to Satan and define myself by my dark moments and embarrassing antics, then I would certainly be hopeless and suicidal.

But thank God that no one (that matters) defines me by those moments!
More importantly, thank God that HE doesn’t define me that way.
And thank God that He gave me amazing people in my life who have loved me right through my depression, right in the middle of my panic attacks and meltdowns, and instead of defining me as “crazy” or “hopeless,” offered me grace and showed me that God’s mercies are new every morning (Lamentations 3:22).

I don’t think there is a culture-wide solution for ceasing to define celebrities by their worst moments short of salvation and grace-filled and grace-offering lives for everyone (that would be rad, though). However, much can be learned from this grace-less world and much can be applied that will literally change lives. It changed mine.
It SAVED mine.

First, we can accept grace and apply it to ourselves.

Secondly, as we have received grace, we can pass it on.

Finally, and most importantly, we can absolutely fall in love with Jesus, as by His grace, He’s the one who makes a life worth living possible!
We love him because he first loved us. (1 John 4:19)

My prayer for celebrities and all who are facing the harsh reality of their sinfulness without the balance and the respite of the hope of Jesus is that they would know that it’s okay not to be okay. If we were okay, God wouldn’t have sent and sacrificed His son Jesus for us. My prayer is that they will trust Jesus as their savior, repent of their sins, and turn to Him, trusting Him for a new life. My prayer is that they would know that they aren’t failures, because in Jesus, God sees them as perfect and lacking nothing.  I pray that when Sadie does fall short of the ‘perfect role model,’ she will be met with grace and forgiveness. My prayer is that we would ALL learn grace – not only for ourselves but to offer to others – and that as a result, we would fall more and more in love with Jesus.

I’ve been a perfectionist my whole life.
I wanted to do things my way, and do them perfectly. I was tying my own shoes at age 3! But I’ve also been miserable a lot of my life as I’ve obviously failed at perfection and more recently, come to see more and more how wicked my heart is. This season has been so difficult as I’ve wrestled with accepting my imperfection and vulnerably allowed others to see me as such a mess.

But what rest it gives my heart to know that even though I may occasionally see myself as a crazy, hormonal maniac (on a wrecking ball), in Jesus, I am seen as PERFECT in my Father’s eyes!
And that is all that matters.

For we ourselves were once foolish, disobedient, led astray, slaves to various passions and pleasures, passing our days in malice and envy, hated by others and hating one another. But when the goodness and loving kindness of God our Savior appeared, he saved us, not because of works done by us in righteousness, but according to his own mercy, by the washing of regeneration and renewal of the Holy Spirit, whom he poured out on us richly through Jesus Christ our Savior, so that being justified by his grace we might become heirs according to the hope of eternal life. (Titus 3:3-7)

The steadfast love of the Lord never ceases; his mercies never come to an end; they are new every morning;  great is your faithfulness.“The Lord is my portion,” says my soul, “therefore I will hope in him.” (Lamentations 3:22-24)