I apologize ahead of time for the swift change of pace from my previous post to this one… but I can’t ignore the tug on my heart and the lump in my throat tonight (sorry, no “wabbit” fluff balls or naked psychiatric patients tonight). 😉

I did something extremely difficult tonight. I am aware of the fact that I am not the only person in the world that struggles with this. In fact, the presence or absence of this one action can make or break marriages, relationships, friendships… it can help or hinder our relationship with God… it can change our lives.
I not only told someone I was sorry for my actions… I FORGAVE them for hurting me.

It has been nearly two years since I last spoke to this person.

She really hurt me.
I have missed her from the day that she said goodbye… suddenly and unexpectedly… painfully.
But man, did she hurt me.
I allowed my anger to fuel my hurt, so that I could put up a wall between myself and the pain. To tell myself, “I don’t care.”

I often thought about emailing or calling her… but then I’d hear this whisper, “She hurt you. You should be angry! Forget about your friendship.”
And so I’d try.

But the wall that I had put up to protect myself from the pain only resulted in a heavy weight… the weight of the wall. The weight that Satan intended for me to feel because of my unforgiveness.

God tells us so many times to forgive.

Colossians 3:12-13
12 Put on then, as God’s chosen ones, holy and beloved, compassionate hearts, kindness, humility, meekness, and patience, 13 bearing with one another and, if one has a complaint against another, forgiving each other; as the Lord has forgiven you, so you also must forgive.

Ephesians 4:31-32
31 Let all bitterness and wrath and anger and clamor and slander be put away from you, along with all malice. 32 Be kind to one another, tenderhearted, forgiving one another, as God in Christ forgave you.

Wow, that’s pretty blunt, huh?
I don’t know how He could have been more straight forward than that. “Forgive, or else I won’t forgive you.”

And boy, do I need His forgiveness! DAILY!!

But all of those things were just nonsensical attempts at rationalizing my sin.

So tonight… I did.
I made a decision to forgive. I stepped out in humility and apologized. And now, while I wait on a response (and even if I never get one), I will make the daily decision to die to my self-centered desires and thoughts, and put my forgiveness into action. I will take my unforgiving thoughts captive and turn them over to the One who pours out His perfect forgiveness time after time after time for me.

Forgiveness isn’t saying that what the other person did was right, or even okay. It also isn’t giving them permission to hurt us again (which they may… and then guess what! We get to practice grace and forgiveness again! God does this quite often.).
God doesn’t forgive us and say, “it’s cool that you sinned, don’t worry about it.” He hates sin and has nothing to do with it.
Forgiveness is releasing ourselves from the burden of bitterness, the weight of wrath and anger… and stepping in to peace.

I immediately felt a burden lifted when I chose to forgive.
Not to say that this means Satan will leave the issue alone… he may very well tempt me to pick the burden back up again. But I am learning to recognize his tactics and protect myself against them…

I am learning to look to Christ…

…and I am learning to LET GO. 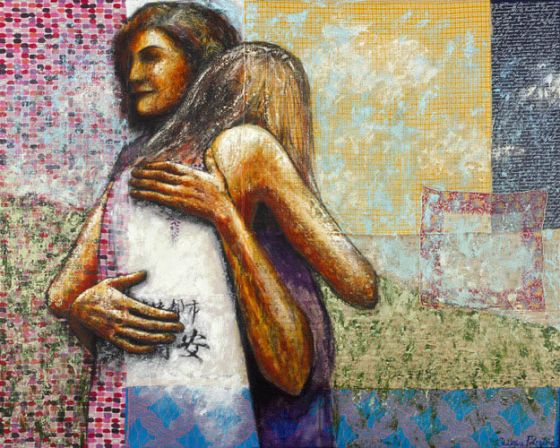 Posted by elizabethree on June 18, 2011 in Biblical Living.